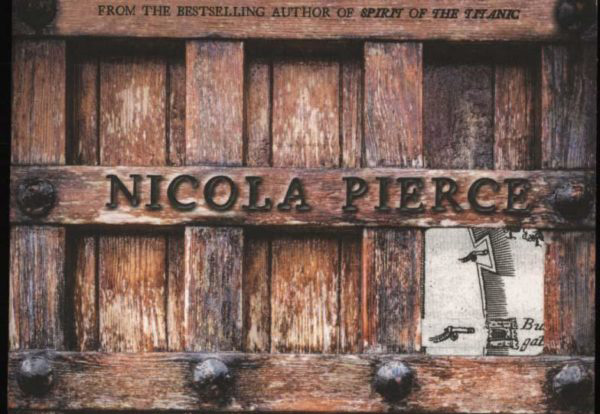 A boy on the threshold of manhood, uncertain of his place in the world but sensing the need to act. While the adults around him dither and fret, he and his young comrades move with boldness and certainty. Their city, their homes, their way of life, their very lives and the lives of those they love most come under what they perceive as the direst threat. They bar the gates and stand defiant in the face of overwhelming odds, refusing to capitulate, willing to die for their king and the principles they hold most precious.

It is a stirring tale of valour and honour in the tradition of Walter Scott and Robert Louis Stevenson. Behind the Walls is the third novel for children from Tallaght-born writer Nicola Pierce. As with Spirit of the Titanic and City of Fate, she has gone to a pivotal moment in history, one on which the fate of a nation and an entire continent turned. Behind the Walls tells the story of the 1689 siege of Derry, when 13 boys locked the city gates and refused entry to James ll and his army.

The novel, which blends historical fact and creative imagination, has turned out very different from originally intended. To begin with, Pierce was researching a story about the Battle of the Boyne.

“As always, I was on the look-out for real characters that I could use and discovered a 19 year-old Jacobite, Gerald O’Connor, who had fought at the siege of Derry the year before the battle. I thought his experience of the siege would help introduce him and make an interesting opening chapter.

“However, when I began to read about the siege, I found it to be such a fascinating story, with a wonderful cast of characters, that I immediately felt it deserved a book of its own. It is a story about ordinary heroes and ordinary cowards and, just like the Titanic story, I found myself wondering what I would have done, had I been there.”

It’s a story that had to be handled with sensitivity. “I did feel a sense of responsibility,” says Pierce. “I had a nagging voice in my head that kept telling me to be careful and persisted in questioning my interpretation of the characters.”

Despite the fraught nature of the exercise, the story simply took over. “That’s the beauty of being a novelist. I forgot that I was a Catholic. I could free myself of the subject and just be excited by the story. It’s a tricky subject, but it’s a fantastic, thrilling story. I was true to myself as a writer, and just let my instinct and my imagination go with it.”

Behind the Walls features real people whose names and actions continue to resonate. It contains more history than Pierce had planned, but the novelist can sometimes do more than the historian, while still remaining faithful to the facts. “That’s the role of the novelist, I think,” Pierce says. “I wanted to show the grey areas in between all the facts that have been handed down, including with the character of Robert Lundy, who is mostly remembered as an out and out traitor. I was able to try and imagine what he might have been going through and do my best to portray him as a real human being who was being pulled by both sides.”

The pivotal events covered by the book are mirrored in the emergence of the central character. Behind the Walls follows Daniel Sherrard, the younger of two brothers who helped shut the gates. Pierce presents him as a 14 year-old boy, sensitive and intelligent, growing out of the shelter of his family, out of the dreams of childhood into an adult world of action and decision. Pierce, who hopes the book will feature on school reading lists, sees the book as much more than an historical account. “It’s a coming of age story. It’s about fathers and sons. I’ve tried to show a young boy becoming a man, trying to make sense of the world.”

As part of her research for the novel, Pierce spent a good deal of time in Derry, and was thrilled to hold the same weapons, watches, and other artefacts that were once held by key protagonists in the events. Research for her next book will be done closer to her Drogheda home, as she follows history and Daniel Sherrard into 1690, and the Battle of the Boyne.